On Friday August 19 and Saturday August 20, GOTW#2 co-incided with the 2016 Night Festival and with related events held in the  Objectifs courtyard. The exhibition remained open late on both nights and attracted huge crowds.

Thrashing in the Static, song-film

How far is too far? How can we look over the edge, feel our way beyond the horizon? Time travel is probably impossible.. we navigate the space-time continuum moving forwards… backwards would entail warp speed propulsion, beyond the speed of light. But not all encounters are rational.. our perceptual experience of living in time is strange.. allowing us to remember, to imagine.. to be in our haunted flesh and bones. We look by looking backwards, as time travels through us, propelling us into the future. As physical and metaphysical phenomenon, seeing is strange, uncanny, magical..

Alf, my half-brother, a young sailor, was ‘lost at sea’ and remains stranded in 1942. Can the technical operations of a ‘sorcerer’s cinema’ and the uncanny nature of painting and erasure derange our senses and create magical, relations to space-time, allowing us to traverse time-zones and cross the bounds of one temporally imprisoned human life?

Responding to telegraphic communication, and disorienteering,Thrashing in the Static (2014) and Skinny White Sailor (2006-14) explore psychic time travel, crossing from the Thames foreshore in 21st century London to 1942 and a tiny island in the South China Sea, long away and far ago…

The title of the ‘song-film’ work comes from ‘Haunted Media’ by film scholar Jeffrey Sconce. It refers to an episode of the American TV series ‘The Outer Limits’ where scientists are trying to reach ‘the other side’ on behalf of a wealthy patron who wishes to contact his dead son but is left ‘thrashing in the static’.

This work seeks to expand perceived  temporality by manipulating frame rate, time base and shutter speed, using layering of obsolete media, including: 16mm, Super 8, 8mm, SVhS and  mini DV as well as contemporary HD and meticulous re-filming techniques. As the film progresses, viewers are led to a different time zone as the frames slow gradually, fall to chaos and eventually resume regular speed in the conscious present. Formally, the work builds on my practice-led doctoral research for ‘The Elusive Digital Frame and the Elasticity of Time in Painting’ (2012) exploring time and affect in art and also, work on Artaud’s ‘sorcerer’s cinema’.

Alf was born in Weymouth in January 1923. Immediately before joining the navy aged 17, he worked as a bar steward in a hotel in Weymouth. He completed his training at Falmouth in Cornwall. His parents Ern and Maggie lived in Ealing, London. Ern was my father, a sailor. HIs full name was Albert Ernest Robinson, mine: Anne Elizabeth. ‘Able Seaman Alfred Ernest Robinson’ on a gravestone in Kranji Cemetery in Singapore.

Alf was my half brother and although I never knew him, he was a presence through my father’s still palpable, though unspoken grief at his loss and a tea chest in the loft with a few medals and letters. My dad’s pain audible as he sang. Much later, I was told Alf had been a warm, funny boy who lived to sing. ’Lost at sea’ was all I knew until, decades after my father’s death, I rediscovered the only single photo if him I had ever seen: aged 18, sitting on the dock on the day he was ‘passing out’, He looks excited, hopeful, though presumably apprehensive as going off to war. Alf was most recent in a web of relatives and ancestors in the navy, going back hundreds of years: no officers in this web, sailors, cannon fodder for the deep blue, traversing constructed time-zones in the colonial imaginary.

I painted repeatedly from this photo and continue to do so. Later, I was given another, seen here: ‘the ghost on the wire’. A rather more savvy and intense looking Alf, balanced on a ship’s mast. More painitngs follow: Skinny White Sailor. Then, the journey to find out what happened to him. The grave in Kranji the beginning as Gav and Fei visited, photographed and sent back pictures that revealed he was buried between Rear-Admiral Spooner and Air Vice Marshal Pulford, the heads of the entire Navy and RAF in the far east – Top Brass. His death certificate said HMS Sultan (a naval shore base), Singapore, 1942: in fact, a much more complex story and one which I think his parents never knew.

Researching the mystery, I found that Alf, along with Spooner and Pulford, were amongst the first to leave Singapore following the Japanese invasion, on board ‘Fairmile ML310’, in a company of about 40, crammed on to a naval motor intended for 12. Their boat ran aground on a reef, off the coast of Tjebia, a tiny island in the South China Sea, part of the ‘seven brothers ‘group and no longer inhabited…

The sailors scrambled ashore, stranded for three months until 18 or so survivors escaped on a local fishing raft, Half of the men, including Alf and the two commanders had died of fever. They were buried on the island and reburied after the war in Kranji Cemetery, Singapore.

The story as I found it, was written up by a survivor, Richard Pool. He describes Tjebia: ‘Lying between the two hills was a large central plantation of coconut palms which stretched right across the island. Beaches of volcanic ash formed the eastern and western coasts .. We discovered three fresh water springs.’

I wondered if Alf, on the island also remembered our father’s ‘palm tree’ tattoos…

Pool writes of the admiral dropping English formality, wearing robes, suggesting they all live on the island and become self sufficient, of the large carnivorous lizards, the mental and spiritual deterioration of the marooned sailors, the trauma as they died of fever and the presence on the island of an abandoned telegraph station

.. now I am haunted by this island landscape.

The only ‘pictures’ I have of Tjebia are the black and white image of the graves, taken after the war, and a fuzzy colour picture from google that may or may not be the island.. I have never been to Singapore, or indeed on a long voyage, yet the landscape of the island haunts me now.. the magical possibilities of conjuring this place with film: looking into the spiritual beliefs of these islands, local shamanic practice. I find other links: the Temiar people in Malaysia for example, hold the belief that dreams are a link between nature and the realm of the spirits… Dreams inspire much of their music and I have found a recording from 1941 of a Temiar dream song entitled: Bah Moto – The Spirit of the Motor Boat. These further researches suggested some of the arrangements of the song track and percussive noise on Thrashing in the Static.

The song was composed in 2014, as the work was constructed for the Bermondsey show: the words mostly written on the banks of the Thames around Greenwich and Woolwich. The tune emerged all-at-once and sung, no doubt affected by remembered songs from the edges of Scotland and the West Country: a lament. Neither voices nor waves respect any boundaries. This work exposes the fallacy, the sheer impossibility of borders in the sea and the artificiality of time zones. A photograph, an indexical record, of a young boy with the future in his eye stares back at me with a challenge to give an account of his soul’s journey and breaks my heart.

Robinson, A. (2012), The Elusive Digital Frame and the Elasticity of Time in Painting, PhD dissertation, British Library/Ethos: 573406

Robinson, A. (2015) Enlarger Than Life: Song-Films and Irrational Gestures

Pool, Richard (1987), Course for Disaster: From Scapa Flow to the River Kwai, London: Leo Cooper. (Account of the wreck on Tjebia)

Joo Choon Lin was unable to attend the artists’ talk on Saturday August 20th, but that morning she sent instead by text a description of her aims and the background to the work:

“I was trying to respond to the first version of the work..instead of printing representations of sea/water..this time I wanted to print water in a more symbolic way… almost like how ancient Egyptians used hieroglyphs or pictograms … abstract languages that are to be decoded … people have been searching for a higher resolution of images or hd or the clearer the better … to represent the ‘lifelike’ nature of reality..but i think the screaming coming from the mouth of the printer and the strikepin that creates an  impact on the paper and those shaking..its unpredictable twist or sabotage of the image-making when hung upside down … is more ‘lifelike’ than a high resolution or hd … the cross symbols that appear everywhere in the works … showing how the characteristics of water will blink and shine when surrounded by any light source … the cross can also be seems as the cross used in exorcism as the printer is hung upside down … Objectifs used to be a church before it was converted into an art gallery.

The initial idea of wanting images of water/ resemblance  of  a waterfall as images are ubiquitous, are everywhere … a response to our mass culture … how easy it is to access images; and people can use them for own use and images are manipulated and compressed to a lower quality, e.g. into gif files..i like the idea of destroying copyright or ownership … people can use images freely like water.”

Shubigi Rao’s large-scale ink on paper works , combining text and image, deal with the codes of internet wired communication, and the way in which these codes flatten our differences, affiliating us to another.

She is currently Artist in Residence at the Kunstlerhaus Bethanien,Berlin. She is returning to Singapore for Ghost on the Wire#2, and will be one of the artists talking about their work in the gallery on Saturday august 20, 2-3 PM.

We’re really happy to be presenting (at ‘Ghost on the Wire#2 at Objectifs, Singapore, August 18- Sep 4 2016) a major work by Emma Talbot, who is showing with us for the first time. Emma’s piece, a large painting on fringed silk, explores Entrances and Exits, and the thresholds of coming and going, waking and sleeping. As with much of her work, the content is presented as a series of scenes, rather like  a kitchen-sink drama, and has an interplay between image and text.

Emma has shown internationally, and is represented by Domobaal, London and Petra Rinck Galerie, Dusseldorf. Her work is included in ‘Drawing People’ and ‘100 Painters of Tomorrow’ (both pub. Thames and Hudson). Earlier this year she exhibited ‘Unravel these Knots’  at the Freud Museum, London, and was shortlisted for the John Moores Painting Prize. 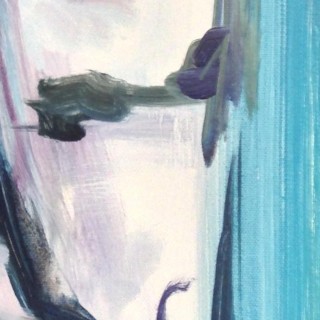 Ghost on the Wire
Blog at WordPress.com.
Loading Comments...